Masopust like Carnival means good-bye meat.  Perhaps more it means another excuse to party in the winter time.  I know Prague makes the most of it with a whole series of local festivals only loosely connected to the upcoming Lent.  In our research, however, we learned that the charm of a public Pig Slaughter Festival is now an event of the past.

In January I happened to see an announcement of a “Pork Festival” at Namesti Miru near us.  Always up for good street food I put it on my calendar for Saturday lunch. That day appeared with very iffy weather but the square was only two tram stops away so we went. By the time we arrived it was snowing, which added to the charm. Despite the weather there was a good crowd that seemed to be enjoying themselves. 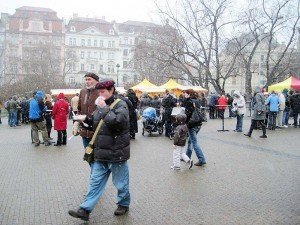 We did a circle of the booths to pick something to buy. As usual there were no signs in English so we chose a sausage that we could point to rather than pronounce. There was a large selection of pork dishes as well as a beer tent and a small stage with musicians. 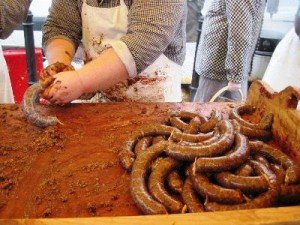 The most popular booth had two pig carcasses hanging and sausage stuffing going on.  Here is a quote from the news report: “We’re making jtrnice – mainly from pork entrails – bits of liver, lungs and pork stock with bread, onions, garlic and other seasoning. We mince it and press it into casings made from pork guts.”

Two days later we happened to spot another news article that announced the centuries old tradition of pig slaughtering feasts were now considered outlawed by new European hygiene standards. Farmers can only butcher for their own home consumption; sharing with friends and neighbours would be subject to a huge fine ($16,000).  The fest that we went to was sponsored by the city government and was a sanitized version with no slaughtering on the premises. This type of event especially appeals to the older generation now living in the city. It brings back memories of their youth in the villages. The true winter pig/pork, bacon/ham festivals are declining but still popular through most countries of Europe. They pre-date Christianity, going back to pagan fertility rites.  In Czech villages they act as a family home-coming celebration, much like the American Thanksgiving. 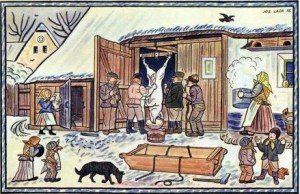 This painting is by Josef Lada, the Czech Norman Rockwell.

It starts with a squealing pig strung up by its hind legs and dispatched by the butcher. Next the women wade in for the ingredients to blood soup, goulash with entrails, head cheese and, of course sausages. Finally different cuts are taken for curing and preserving and the best pieces are roasted for that day of partying.

I have written a great deal about the benefits of eating locally produced meat and vegetables.  Now Brussels bureaucrats are forcing their point of view that pork produced in large factories is better for you than that raised in the field next door.  Our experience watching lambs and kids grow and frolic from our veranda in Paros and then later in the year buying the meat from our neighbor proves this wrong in our mind.  One often reads in the news of recall of contaminated meat from factories or warehouses but not any accounts of bad food that has personally passed the inspection of a local farmer and that you buy in a local market.

I give a lot of travel advice and right now I strongly urge people to look for local festivals and events and participate before they are legislated out of existence or are smothered by worry-wart do-gooders who take the fun out of life.  Another example is greased pig chases. I remember them fondly at the “Aloha Daze” events of my childhood community in Oregon, USA. Today doing a Google search everything I find is past tense from years ago.

I think all travelers enjoy reading travel adventures written during a past era when every where was more interesting than today. Tomorrow may be more sanitary and “correct” than today but will probably be less interesting and exciting. We used to say we want to travel while we are young enough to enjoy it, now we say get out and travel before the bureaucrats homogenize all culture. 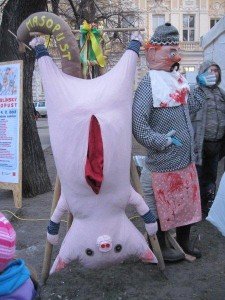 Now back to Masopust and Prague:  each neighborhood has its own version of the pig festival and masked parade.  The first one we went to was on a VERY cold day in Karlin.  I am hoping the effigy shown in the left photo was a dig at the EU regulations.

Since then we have seen many roasted pig heads used as decoration and many people in costumes drinking as they walk down the street.  Karin was even accosted on Mostecka street by  Charles Bridge.  It’s all good fun.

The short version was originally published as Are We Losing The Charm of Pig Slaughter? on Blogcritics.

3 thoughts on “Pig and Masopust in Prague”