Included here are a few highlights of our first adventures on Paros when we were flushed with enthusiasm for our new lifestyle.

These excerpts are mostly taken from emails home to our son and other friends.  Karin uses her evocative literary talents with some judicial editing by Michael. 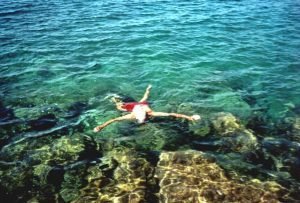 We went snorkelling. Michael wanted to walk out to the end of the peninsula where the sea meets the bay.  It was very clear, but very very deep.  I did not have the courage to go in….he did and enjoyed it.  Said he saw different fish than in the bay also that the depth made it more dramatic…so when he finished I went into the bay and snorkeled in shallower water.  I also saw fish, and a huge school of tiny fish. It was fun to swim through them, they don’t seem to mind!  Michael said he went through a school of fish that the sunlight made look purple.

Tonight’s sunset was spectacular…an ultra-light was flying through the picture perfect scene…red sunset with a glittery path across the lavender and pinkish water…islands dark purple in the background, a ferry boat catches the sun and shines golden…a scattering of little fishing boats…on the island across from us lights starting to twinkle like distant stars…but wait! Am I in heaven or Paros? My guess is – it is both!!!

Kolimbithres Mycenaean Site: This is the site we climbed to early one morning before it got too hot! (We had seen it earlier in the 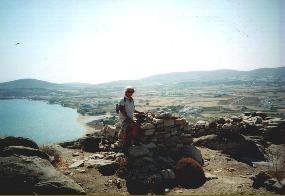 week but were tired from swimming and beer.) Mycenaean Acropolis from about 1500-1200 BC. It was called an Acropolis because it was built on a high site overlooking the area. Below us but out of view is a smallish plateau where the foundations of houses are, but it was impossible to climb down and the only way was blocked intentionally, I think to keep people from going down and digging for antiquities. What I am resting on is a reconstruction of a pillar base or wall. It is impossible to know what is what because it is so old. The view in the photo is totally washed out but you can get an idea anyway of the edge of the bay where we swim. This site is about 25 minutes from where we live….by old roads. 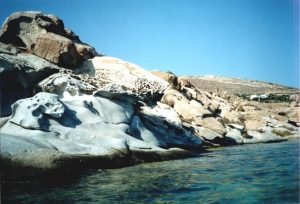 Kolimbitheres Sandstone:  This is part of the beach where we swim…it is sandy a long ways out, then gets deeper, then shallow again, so it is funny to be in the deep part and see people further out standing up! These rocks are surrounding the beach on one end making it dramatic. The water is crystal clear in my picture, but perhaps it does not come out so in your view! The rocks are sandstone and wind sculpted into weird shapes. After swimming we go to the taverna which is just over the rocks. A hotel appears up on the side of the hill in the trees, and the Mycenaean site is also just up on the hills above this picture.

Market Street: The main street in Parikia is called Market street and is about 1/2 mile long 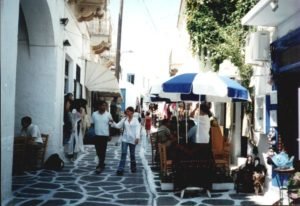 and only 6 feet wide in most places. With all the sidewalk merchandise, three people abreast completely block traffic–which frequently happens as no one is paying attention, or trying to get anywhere. It is not straight, but wanders around with corners. It is nearly all shops…and cafes. It is the oldest part of the village, making it the original. The sea is only about 1/2 block away for most of its length. This street is jammed packed in August…and is open from 10 in the morning until midnight! Again, it takes on an entirely different atmosphere in the night with all the lights. Some very expensive restaurants with beautiful courtyard tables also are here. One of my favorite coffee places is on this alley under a huge tree in the middle making the road go on both sides of it. The tables are very good people watching!

People watching is amazingly fun…wow, so many types ranging from the good, the bad and the ugly. From all classes, from all religions, from all cultures. An amazing amount of very young looking backpackers…I wonder if their mothers know where they are? In fact almost everyone looks young and beautiful! (especially on the beaches). When we first started out in Crete in early May, a lot of tourists appeared to be our age…so I did not look or feel out of place on the beaches…But when it gets into full swing…well the beautiful young topless, and body perfect nudes will send me into spasms of realizing I am indeed old even if I think young! Oh well…as I keep reminding myself over and over…I had my hay day! And still am! 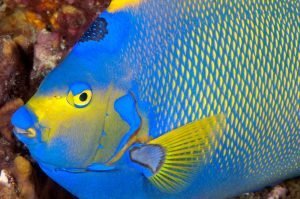 Yesterday when swimming at Aliki, I saw my first brightly colored fish. Usually they are pale almost transparent, but interesting designs on them. Also some are quite large. Well, yesterday I got braver and went with my snorkel over some rocks. There it was…lime green, peacock blue and rust!!!! Beautiful markings…he was quite big about 10 inches long. He was chasing the other fish from the area and then would rub his side fins on the rocks and other stuff that grows there (looks like flowery mushrooms). I think he was marking his territory or maybe it was a she…I don’t know about fish life! Anyway, it was amazing and I followed it quite awhile. Later on a school of large normal fish came through. They cast shadows that made it look like twice as many! Tiny fish come close to the shore at ankle height and sometimes tickle your feet. Dad said to be careful of the black spiny things (urchins that live on rocks) as they leave their stingers in you. Thankfully they seem to stay in bunches in deeper water and I do not like to swim near them. Last night we went to a new beach called Parosporos…for a quick swim…beautifully sandy far out and far wide!!! No fear of black spiny things there! Warmer currents are now starting to appear…bath tub warm!  Full list of Paros beach descriptions here

Food vs. Cooking: Obviously eating out is more versatile, but unfortunately not as economical – not even in Greece! The restaurants

here have different levels of eating…same as anywhere. We enjoy eating a quick bite at the outside cafes. They can come in a variety of price ranges…also the tavernas which have the ouzo and other drinks plus really good food. Almost all restaurants are outside, even when you go inside and eat between four walls, just look up and the ceiling is missing!! Usually it is covered with vines of flowers, or grapes, or rush mats, and often you can see the stars at night! It can be on the sea, literally on the beach, or just about anywhere. One interesting aspect is that you are encouraged to go into the kitchen to see the food prepared…in fact, they often insist you go look! Looking sells…it is hard not to drool over the pots cooking away. Tavernas usually have a good variety to choose from, but with many it would be cooked by the owner’s wife in the kitchen. (not a chef, or even a hired cook…more home cooked). These are some of the foods we seem to eat:  gyros or souvlaki’s in pitta, (pork or chicken); greek salads (cucumber, tomato, green peppers, olives, feta cheese with olive oil and vinegar;  tost (toasted sandwiches made

with baguettes – squished down pretty flat with just about anything in it…usually ham, tomato, etc.);  omelettes;  moussaka;  grilled squid (which Michael likes); some other fish dinners which I can’t think of the names of.  These are the cheaper foods.  Oh yes, a starter that I love, and have tried to make is made from gigantic white beans in a tomato sauce, and sometimes some sausage tucked in.  The added spices make it a truly wonderful meal even in itself.  And we also like the dolmatha’s (stuffed vine leaves.) Ready for a taverna cooking class? 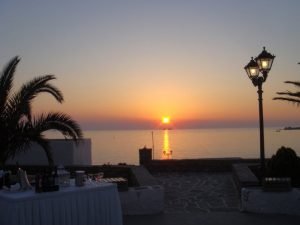 Paros has their own local wine that is reasonably good. Both red and white. Of course we drink ouzo. And the cold coffees, Frappe. Everyone and I mean everyone carries around water to drink…because the sun is relentless, and you sweat a lot, leaving you dying of thirst. It is probably the no. 1 best seller!! We have found no difference in the taste vs. price. All water is cheap…a 500 ml bottle in Ireland costs 65 pence, here it costs the equivalent of 28 pence! Our 6 packs are water, not beer! Michael drinks Amstel beer because it is reasonably priced. I have found a recipe for lemonade that is very good and the lemons here are cheap. Oh yes, we bought a big bottle of ouzo. Dad figured out each glass (normal restaurant serving size) costs us about 25 cents each serving (30 cents USD)!!! It is about 1.50 Euro in the restaurants…still making it a nice affordable daily drink!!!  Read more about island wines here.