Conventional wisdom says Christmas is not as big a holiday in Greece as Easter. Compared to the US and many other countries this is probably true. Easter here not only has the huge religious significance–as it does elsewhere–it is one of the traditional family reunion times. Usually held in good weather I have heard it described as Independence Day, Thanksgiving and Easter in one holiday.

Christmas is gaining ground in Greece, however, especially in the amount of decorations. I will describe some of the events on our island and then a bit about the capital, Ath 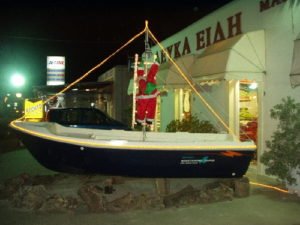 ens. The smaller villages like our Aliki all have decorated street lights and there are a scattering of houses with exterior decorations. In early November we were quite surprised at the large stacks of Christmas lights on sale.

The first week of December we have the annual Bazaar put on by the volunteer organizations as well as the official tree lighting in Parikia. Doesn’t that all sound like Christmas elsewhere? The Charity Bazaar is quite well organised and very well attended due to participation by all the youth groups and other island organizations. On sale is everything from homemade baked goods to Greek pop music calendars as well as second-hand junk. Our friend Patricia who also runs her own bazaar in Aliki does quite well with her chutneys and specialty jams. Karin spent time examining the hand-made jewelry while I checked out the main “grab bag” booth. For 5 Euro you get two chances at a dazzling array of prizes–from a new bicycle, used computer, to countless bottles of wine and bags of cookies. I should have been clued-in by the still large assortment on the last night, but I thought with so much available surely I will get something for my fiver. Wrong! I drew two blank pieces of paper. So the universal phrase comes to mind: Oh, well. It’s for a good cause.

We were surprised how similar the lighting of the town Christmas Tree was to others we have been to, yet pleasantly different in a Greek way. The manger or crèche contained school children dressed elaborately for their roles. The carols had familiar tunes with Greek words. The brass band were in their one and only uniform, that is the same one they wear on Oxi Day and other formal occasions. The Mayor’s speech was surprisingly short. Santa Claus was a minor figure; the emphasis was on the birth of Christ.

We were very impressed when two men lifted two of the younger manger characters to the stage who then spoke out loud and clear with prepared speeches that were several sentences long. These were pre-schoolers who were not affected by the crowd or the microphone and knew their parts perfectly. We were also impressed when the tree lights came on. Before we had only noticed a string of large bulbs, yet the tree was completely covered with small lights. The large bulbs were just flashing blue highlights. The amazement was that coming on all at once they didn’t blow a fuse for the whole town! By the way, most people know that the buildings in the Cyclades are 95% blue and white. I find it interesting that blue lighting is as popular here as our English traditional red and green.

The highlight for Karin and I is all the music programs. Our island of Paros is blessed with two active art schools that produce programs at the end of each term. So, for example, the week before Christmas there are three choral concerts being presented. The venue is usually one of the smaller churches so the beauty and acoustics lend a lot to the quality of the voices. We enjoy our quiet, non-commercial Christmas on our small island of Paros. For those who want more excitement and pizazz it is an easy trip to Athens.

The above was written by Michael.  Go HERE to experience a local Christmas in Karin’s evocative style.

Athens city centre is very festive at this time of year. Our descriptions and pictures don’t give the full flavour of all the entertainment provided on the streets. There were countless unofficial performers, even a band from the Andes in South America, fun holiday booths, food galore and the tradition we have not seen elsewhere of Santa Clauses with ponies to ride. You have to be there to appreciate the glory and joy that one feels when surrounded by thousands of people all having a fun time. 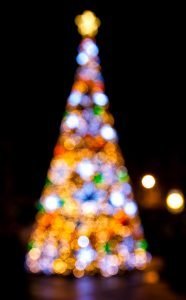 This is from the 2005 official press release: “Our motto this year is ‘Christmas lights, trees and friends, the party in Athens never ends’ and we invite all to join in the fun – to dance, play and celebrate! The party begins on December 15, when the Christmas tree at Syntagma Square will be lit, and continues through to January 8. On December 17, Kotzia Square will come alive in the form of the Land of Gifts and Goodies. It will feature 52 miniature log cabins full of Christmas decorations and gift ideas, a Christmas tree and a second carousel. At the Zappeion Gardens, one will encounter ‘The Crystal City’ and within this wonderland is a 450-square metre ice-rink where all are welcome to test their skills on the ice. On December 21, Omonia Square will get into the spirit of the season as the Sparkling Tree, a beautiful white Christmas tree adorned with thousands of shimmering lights, is illuminated. And finally, the New Year’s Eve concert at Kotzia Square promises to be a rousing celebration with an exclusively Greek flavour.”

Join Karin for a magical trip to Athens HERE