September is now a fading memory, and October is here! What an exciting month September was… not tourist-wise, but personal friend-wise. We continued to have a few tourists, but it was definitely in the slowing down mode, making rooms available for our friends, who had patiently waited until fall, when we could accommodate them with our time as well.

Friends from the States… imploring them to bring those treasured items we could not find here, such as taco and chili mixes, yet mostly hoping they would bring a curiosity to know Paros as we know it. We were most anxious to show them around and introduce them to our lifestyle, while knowing they would enjoy doing “tourist” things as well. The weather was changing, however we found September still a good time for swimming and other outdoor activities. The sun was not so terribly hot, more clouds in the sky, and definitely less people on the beaches. Gone were families with children as well as the topless bathing beauties; in their place were the older generation. We felt quite at ease in our swimming attire! 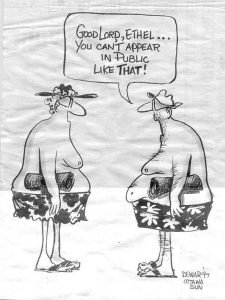 Watching our guests go from “city/business” time to what we call “Paros” time is interesting to observe. By that I mean that most people do not have the laid-back attitude when arriving… they still are on a schedule where time matters… whereas after relaxing for several days a guaranteed metamorphous takes place. For the men it is feeling quite at ease here wearing no shirts, only shorts, exchanging shoes and socks for sandals. Women make the most changes I think. Something happens to even the oldest of us… we feel so alluring in the free flowing fabric of the beach cover-ups, often going barefoot and some even buying a toe ring! It seems to liberate older women, they feel young again and that is good, is it not? These are people that under normal circumstances could not imagine themselves dressed this way!

Most people comment on the early morning rooster symphony, but also realize it is better than traffic noises and exhaust fumes of the city. They come to love the warm nights with candlelight dinners on their balconies, often accompanied by Greek music from a nearby taverna, long lazy days reading a book at the beach; a scooter ride around the island to find another area to explore. The most common complaint we hear is: “I wish this never had to end”! We are often humbled when our guests remind us … “to think, this is YOUR job!!!” As I have mentioned before, yes it is a good job, but it is hard work when we are busy! Somehow, I think they don’t believe us!

Nature is one of the reasons I am so in love with Paros and September has brought one surprise after another. Some good, some I could do without. One that was not so nice was getting stung by a bee… I was on the back of Michael’s scooter coming home to Aliki. I might mention that one of the drawbacks of scooter riding is that you get in the way of flying objects. We have managed to stay a respectful distance behind trucks so rocks from their tires do not hit us, but we just can’t manage to stay out of the way of flying insects! We often feel small things hit us, but since we wear glasses they do not get into our eyes. We have learned to keep our mouths shut! During the first two days after the sting I found a great technique for the swelling and intense heat coming from the bite… putting wet towels in the freezer and while wrapping one around my arm, the other was becoming frozen!!! Then in a few days the itching started… and then after a week the swelling went away. I am still a bit leery of what will get me next! I try to remember that we have ridden scooters nearly every day all summer long for two years, so what is one bee sting? Hmmm…

The other quirk of nature happened after an incredible downpour that turned our center courtyard into an ankle high lake (due to a clogged drain) and our outside stairway leading to the upstairs patio turned into a rushing waterfall. The aftermath of it all was a zillion dislodged ants! Not the crawly kind, but the winged kind! None came into the house, luckily, but two days later we are still sweeping up the wings they shed and left behind… I do not have a clue what the cycle is that makes them do this: come with wings, leave without them. We discovered a very large and busy ant hole across the street at the edge of a field. We wondered if they got flooded out or were they flying over and got caught in the rain, therefore not able to continue their flight? Perhaps they made an emergency landing at our pension? However, a friend says she has them also… unfortunately even IN her house. YUCK!

That rainstorm also brought out some large snails and some very tiny ones all hell bent to climb up our outside walls! Come to think of it, a lot of thirsty bugs came out for a drink so we are busy identifying them. Some really large grasshoppers. One actually used my nose for a landing spot, then abruptly jumped into the shrubbery! Plants eagerly drank up the water and now seem to be alive with second growth. Rain is definitely life-giving in this normally dry climate. For me it is also a treat: watching the incredible gigantic thunderheads change shape over the mountains next to us, stretching across the sky out at sea, and in the evening with the sun setting behind them. I can honestly say I have seen some beautiful scenery in many places, but never, never, never have I observed such incredible beauty as here on Paros. Undoubtedly having the constant blue sea as a backdrop shapes the visual senses but definitely God paints the pallet. Being an outdoor nature lover I feel so alive and thrilled that words simply do not come at times. I just feel the power of it all, and it is bigger than myself. I guess a quote read recently, “Landscape has a personality, it has a weight that you feel about it, and it affects your behavior even” would be suitable for me as well.

My neighbor defines the evening skies as a “Turner” for those who know of the English painter. That same neighbor told me a great story the other evening. We were enjoying a brandy on his patio while watching the sunset. He told me: “You know what the Germans say when they see such crimson lined clouds? They say it is the angels making cookies for Christmas”… meaning the red looks like hot coals in the fire for baking.

The land is changing with the seasons. I see men burning debris in their fields, also cutting the roadside bamboo(called kalámi here). This bamboo is used in making sheltering gardens from seasonal winds and make-shift roofs on patios for shade. I have been known to cut down a stalk or two for curtain rods! In Northern climes autumn is the end of the growing season, but here it seems to be the beginning of the next cycle. The garden across the street lay fallow for the summer months but is now being plowed into fine red earth and appears it will be seeded again soon. The storms bring rain, but it is not a cold rain. In fact the challenge is to keep doors and windows open without the rain doing too much damage as it comes in. Most floors are either tiles or marble, so not much damage can happen, only a bit of damp. Easily moped up.

I am writing this on October 8th. A change is taking place in the amount of activities here in Aliki. The supermarket is now closed all day on Sunday, also taking their afternoon quiet times each day. A few restaurant owners are not cooking anymore; going back to their winter life of fishing. We often see them in the bay with their nets out… a sight we never saw during the summer. In Parikia the traffic is so little compared to summer. Sometimes their is actually nothing in the road! At the Port, the Port Police now stand with their arms on the fence posts talking and laughing (I never knew they laughed!) waiting for another ferry to land with a small handful of tourists. A dog lazily walks up the middle of main street while others appear lifeless stretched out on the sunny sidewalks. I had a friend tell me how nice it was to go into town and actually see a another person she knew at first glance. So life is going back to what is normal for the Greeks, before tourism became an industry… It amazes and pleases Michael and I as well as our guests that we can still enjoy swimming and snorkeling. We do miss the longer days. We find we are eating evening meals in the kitchen more and more, but breakfasts can still be eaten out of doors. And just today I spent a great deal of time reading on the balcony, soaking up the autumn sun… We can tell the truth when we people ask “what fall is like on Paros?” My answer is: “About as perfect as you can get.” So, if you plan to holiday later in the season… definitely keep Greece and Paros (and us) on your list. 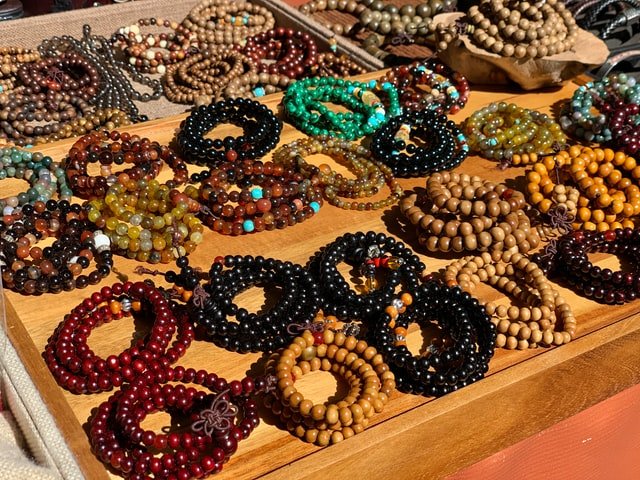 A friend recently wrote an article about komboloi beads. Our first trip to Greece we frequently noticed men, especially older ones, as they were standing or sitting doing nothing in particular, would often be flipping something around in their hands. At a closer look we saw they were beads on a chain, not as long as a rosary, but we thought the Greek men were very religious. Yet we saw few, if any, older women with them. Later when we saw the short strings of beads on sale in shops we found out they were not for prayers but a form of worry beads called komboloi. Thereafter we noticed them everywhere.

I have a set that Karin got for me in Chania, Crete that I like to carry but I am so awkward at flipping them that I only get them out in private. Though they do help ease the stress when waiting for buses or late ferries.