We survived August! For a couple of weeks mid-month, I felt like we were spinning! But, in retrospect, it was lots of fun.

We were amazed how quickly the beaches filled up… how many restaurants there actually ARE here in Aliki (some sprung open literally overnight!), and how the shutters on the houses were all flung open, lots of Greek music and people having late night suppers on their balconies! Quite festive! Paros is one of the destinations of Athenians escaping the mainland heat.

Aliki has their own little festival on the 6th of August celebrated with fireworks, live music, fish and local wine–all free. This party goes on until the wee hours of the morning…and though we live about 500 meters from the village, we could still hear the music in the distance.

Most villages around the island have similar festivals throughout the month, so our guests could chose others to go to as well. For those wanting cultural events, Parikia has many to choose from…a piano concert by the Paros Philharmonic Orchestra; a concert by a music group called ELTA who sing Greek songs; Classical guitar and mandolin concert; a painting exhibition and auction; an author presenting her book about folklore; even a shadow theatre presented by a Shadow Theatre Group. And last but not least, the biggie of all time, the National Holiday which is celebrated on 15th August.

This is Greece’s biggest and busiest event of the year outside of Easter. The day commemorates the Assumption of the Virgin Mary and has been observed at the Ekatontapiliani Church here on Paros for almost 1500 years. After a lengthy service, there is a long procession through the streets accompanied by a naval band. During the day market stalls are set up and in the evening there are fireworks, flare-lit boat parades, and Greek dancing. Parikia is alive with excitement, but another word for it might be “crawling with people”! This is the night that you might find “no room at the inn”. I actually heard of a man putting mattresses on roofs (which are flat here on Paros) to accommodate people without reservations!

I must admit that August is a month when you cannot imagine this island having so many people. The ferries just keep bringing them in, you must just go with the flow. It means lots of work for us with guest houses or hotels, but then that is how we make our living. And when you can see that the guests are having lots of fun, then it makes it all worthwhile. I continued cooking dinners throughout August… mostly on Monday nights and Friday nights. These events really brought people of many nationalities together, and will leave Michael and I with lots of satisfying memories. 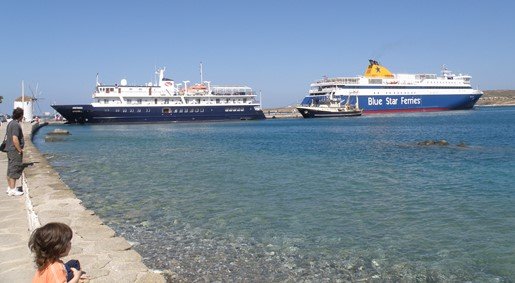 On the other hand, August gave us some terribly hot humid days and nights… which is unusual. Even the Greeks were gasping. Our guests were very good at taking the hot nights in stride, and we tried to help by buying some fans. Most just spent more time on the beach or ate late night suppers. Then we got the Meltemi winds which make life interesting… trying to keep the food on the plate is one – but the plus side of them is that you feel cooler and they also keep away the mosquitoes and flies. However, after a week of the wind roaring nearly non-stop, it was a relief when it went away. The Meltemi’s are a seasonal wind that comes and the Cycladics get them full force.

As September arrives, we notice a big change at the port… the crowds are leaving, not arriving! This is due of course to families having to return home for their children to start school and young adults going back to universities. We will now see a greater influx of senior citizens… who want peace and quiet, which of course they can find in Aliki. The days now are like Indian Summer, the nights are cooling down, which makes sleeping more pleasant. As we eat our dinner on our balcony each night, we are noticing how much earlier the sunsets are. Fall is upon us.

In our back garden, we have a very unusual cactus called “Queen of the Night”.  The owner of the building pointed out to us that this cactus should be blooming shortly, and to think we did not even notice that it had buds on it! Probably because it is slightly hidden in a mass of bushes and a tree trunk. What makes this cactus so unusual is the fact that it is nocturnal blooming one night only! So for a few nights, after dark we would creep out and turn the flashlight on it to see if it was giving birth yet! Then low and behold! last night the tight buds released themselves about 9:00 PM! Wow! what a flower! It was large and yellowish-whitish. We had some guests upstairs whom we invited to come down to see it. We all had the feeling that we were observing a true wonder of nature. This morning they closed tightly back up…so I will be watching to see what happens next.

We celebrated the first few days in September by exploring the interior of Paros which is mountainous. That was a great day… scooter rides up sides of steep mountain roads which should be classified as river beds! Finding a few monasteries hidden among the valleys with heavenly views of the entire Cycladic Islands. We finally ended up on the highest peak, called Mt. Elias. (Elijah). Incidentally most tall peaks in Greece have this name. Since OTE, the telephone company, owns the conglomeration of towers on the very top, we were not actually allowed inside the gates, but it really did not matter…after a long and arduous trip, we felt good about being where we were! As we coasted down, we stopped at every turn to look down into valleys we never knew existed. We now know a well kept secret… the numerous vineyards tucked away that supply Paros with it’s wine. We always wondered how Paros could produce so much wine when we saw so few vineyards on the lowlands.

Isn’t it amazing…we have spent two summers here, this being our third, and we are STILL discovering new sights… for such a tiny island that is remarkable. Each time I bring out the map, I can just feel Michael wondering what exhausting adventure I am going to ask him to accompany me on yet again! I keep seeing new roads… and they all have to go somewhere with new things to be discovered! I think it will be sometime yet before I can say we have seen all there is to see… so till then…

We have been seeing a lot of comments on the Internet about prices in Greece as well as a few newspaper articles. So I thought I would give my editorial slant on the subject.

One comment was that since business is down the hotels are charging more to make it up. My experience is that it does not work that way. Hotels are a very competitive business–empty rooms are immediately worthless–so the hotelier drops prices to whatever is necessary to get heads on beds. That has been the case here on Paros–high season rooms have been cheaper this year, mainly because the high season has shrunk by a couple weeks.

Grocery store prices do seem to be substantially higher this year than previously. Three years ago I believed that only imported and frozen items were more than in Ireland, local meat and vegetables were less. Now that is no longer the case. The consensus blames this on two factors, rounding up due to the Euro introduction and bad weather for fruits and vegetables. I would also add that the Greek economy gets stronger each year.

Official figures that I have seen indicate an inflation rate between 5 and 6%(the government is required by the EU to get it below 3%) and tourism down 10 to 15%. The anecdotal evidence says Paros has 25 to 50% less non-Greek visitors. I can visually see the difference in the mix by just watching the people walk by the café I am lounging in. Last year you could frequently spot Americans and Brits; this year they are rare.

So my advice is to ignore those wild reports of prices doubling and always shop around. If you are the bold type, throw up your hands and say that’s too much. If you are shy, just say “Can you do any better?” Nearly always the price will come down.